﻿﻿﻿﻿﻿﻿Nama's brother / MOTH's uncle (UC) a very inventive bloke who, to date, has assisted us by engineering the internal stairs and creating the baling needles (see earlier posts);  UC has now cleverly concocted a contraption to simplify the making of pins... the images of which have now been removed as requested.
﻿﻿

These pins are used to help keep chickenwire in place, specifically around the windows and doors, where most of AC's straw stuffed gaps are.
﻿
﻿﻿﻿ ﻿
﻿
﻿﻿ ﻿﻿
﻿
﻿﻿ 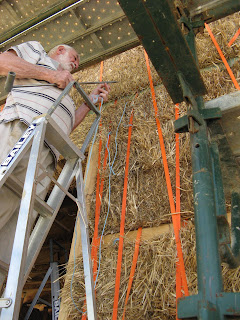 
The pins are used in conjunction with the monster single-prong needle which ensures the chicken wire holds firm. 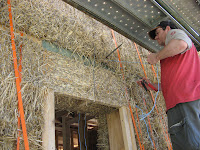 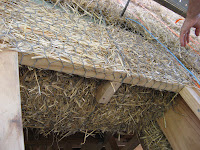 Posted by Goodjams & Family at 5:08 PM No comments:

Gaps of all sizes need to be filled with straw.  AC is a good stuffer! 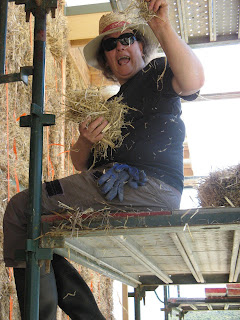 Posted by Goodjams & Family at 8:23 PM No comments:

After much too-ing and fro-ing, the Worm Farm Waste System is finally in place... not that there's much to show for it now it's 6 feet under! 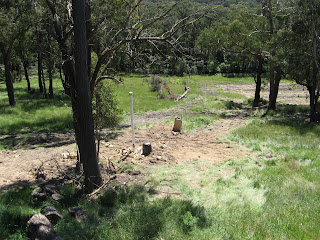 It's a long tale of struggle (similar to many other aspects of building this house!) to get this waste treatment system in the ground.  Very early on in the project, we paid a deposit on the highly recommended Biolytix system which, many months later, literally went down the gurgler when they went into liquidation early 2011.  Upon further research, we chose to go with Worm Farm Waste Systems and they've been pretty fabulous to deal with so far.  The tank was delivered a few weeks back and initial works were carried out to dig the enormous hole required to "house" the tank.  Just as you'd expect, they hit a massive... and I mean a legendary monstrous rock they just couldn't work around.  It was then left to us to "remove" this rock... ha ha ha (and we thank our lucky stars that Fuzzy is switched on cos...) he nicely suggested they try digging to the left or right, considering there's a whole 5 acres of land to choose from.  Naturally it needs to be placed in the vicinity of the first dig, due to it's proximity to the house and fall of the land, but we figured there's plenty of options in a 5 metre radius, so why not try! 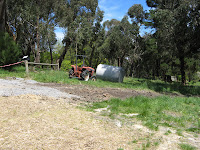 Another element of the setup is to dig pipeline for the distribution of waste to the lower section of the block... an awesome job, but geez they made a huge mess in the process! 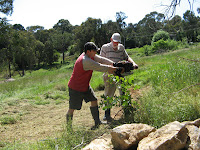 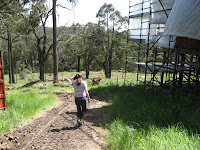 Fuzzy and MOTH thought they'd have a play-dig themselves to make sure we didn't waste any more of WFWS's time.  The eventual result was they broke the stump hole digger :( but ultimately felt their exploration was successful enough for the big guns to have another go a few metres to the side of the original dig.  Another go they did, and although I'm pretty sure the process was way more technical than what I'm about to describe, in a nutshell, the hole was dug, the tank got rolled down the hill, plonked in the hole and covered.  All in one day! 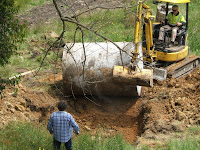 The end result is not all that exciting to look at, but us girls have put a bit of thought into this and decided to use what we now call "the poo pipe" and multi-skill it to become a flag pole too.  Foundation Day and an appropriate jingle is also in the making.
Meanwhile, Nama is tending to the garden... real back-breaking work! 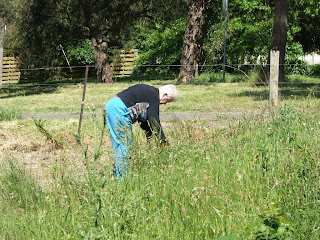 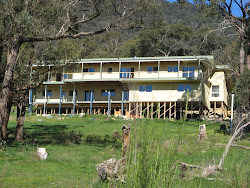